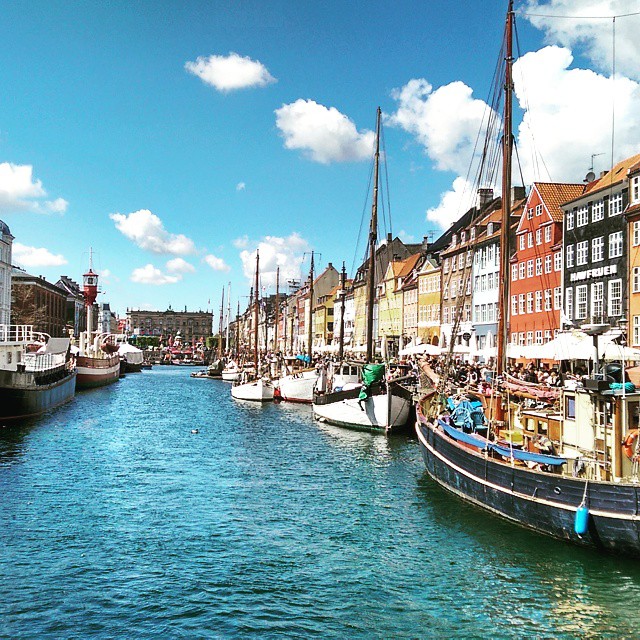 Day 1: Flight landed at 7:15 am. We were met by our friend and took the metro and train to her place in Osterbro (zone 2). We bought a 7-day flex pass for zones 1&2 (250kr each) and an additional ticket to get from the airport to zone 1 (24kr each). We had a good amount of luggage but the trains were very easy to access. After settling in and taking a short nap (we hadn’t slept in 36 hours) we took the train downtown and explored downtown and Nyhavn for a little before heading back home. We bought some groceries and cooked dinner tonight – not worth paying Copenhagen restaurant prices when you’re too tired to enjoy it properly! 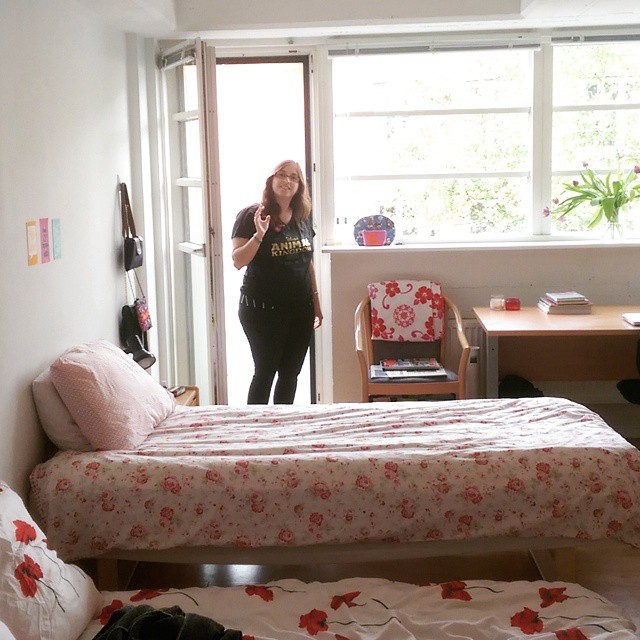 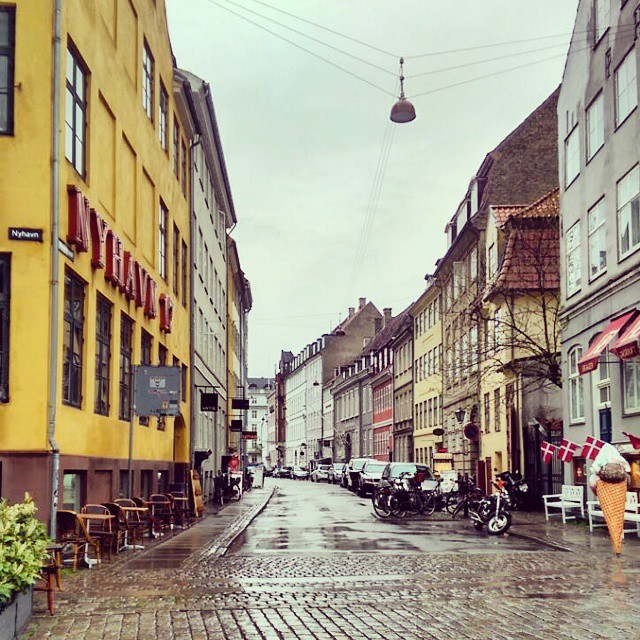 Day 2: After sleeping for 12 hours, we took the train downtown to meet a friend of our friend for brunch at a nice cafe. The omelet I got was good and huge, so I didn’t feel too bad about spending 79kr. After brunch we walked to and around Norrebro. We explored some stores and couldn’t really afford much, but we found this great antique shop where we got two picture frames and a Danish atlas for 120kr. We took a long break at a nice cafe and drank hot chocolate (very small and 32kr, but it let us sit for awhile). We also went for a walk in the Assistens cemetery which I really enjoyed. It’s a beautiful place to walk around, there are many interesting gravestones, and there were lots of interesting birds. I never really thought that there would be interesting birds in a cold nordic country, but throughout the week I have been noticing many. For dinner we went to the volunteer-run student house (Studenterhuset) where they served a big portion of soup and bread for only 25kr. On our way back to the bus stop, we ran into a bunch of zombies walking the streets! 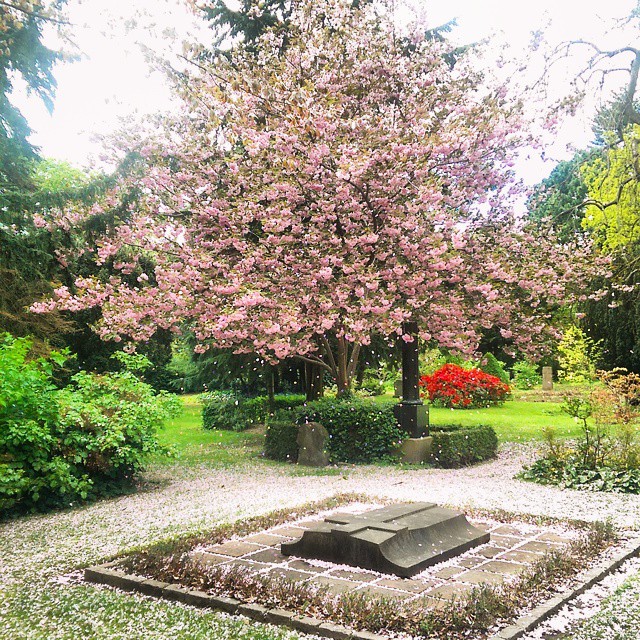 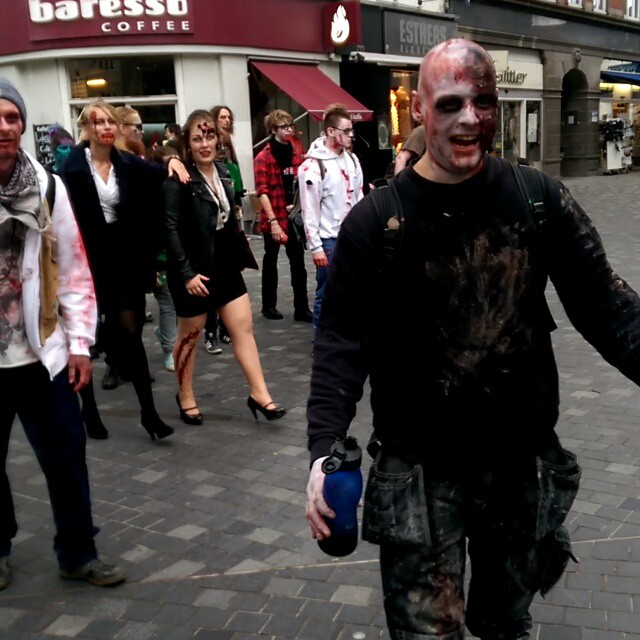 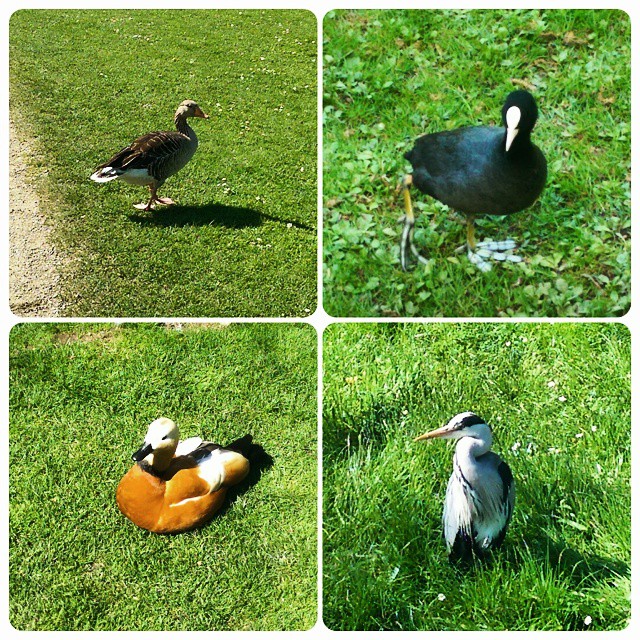 Day 3: Today was our first sunny day so we took advantage of it. We had a small breakfast at home before heading to Nyhavn for a boat tour. The tour was 60 minutes and a great deal for 40kr. Afterwards to took the public-transit ferry across the water to get street food at Papiroen. There were many great ethnic food options here for reasonable (for Copenhagen) prices – I spent 75kr for a large portion of turkey stew and pasta from a Belgian place. We spent the rest of the day exploring Christianshavn (very nice area for a walk) and Christiania (very interesting, a little creepy). On our way home we stopped at Lagkagehuset (a chain of bakeries, there seems to be one everywhere) to try a flodeboller (chocolate covered marshmallow). It was huge and amazing and a great deal for 19kr. A pastry this large from a nice place back home would probably cost more. After getting home we were so tired from the long day that we skipped dinner and just had some leftovers. 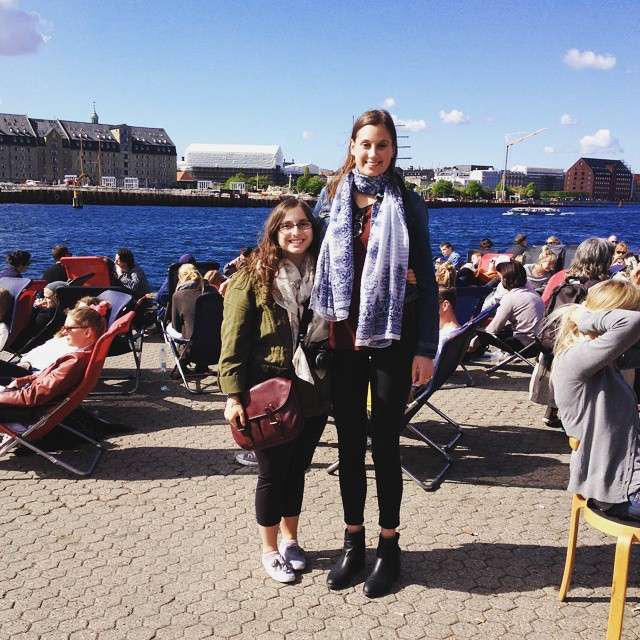 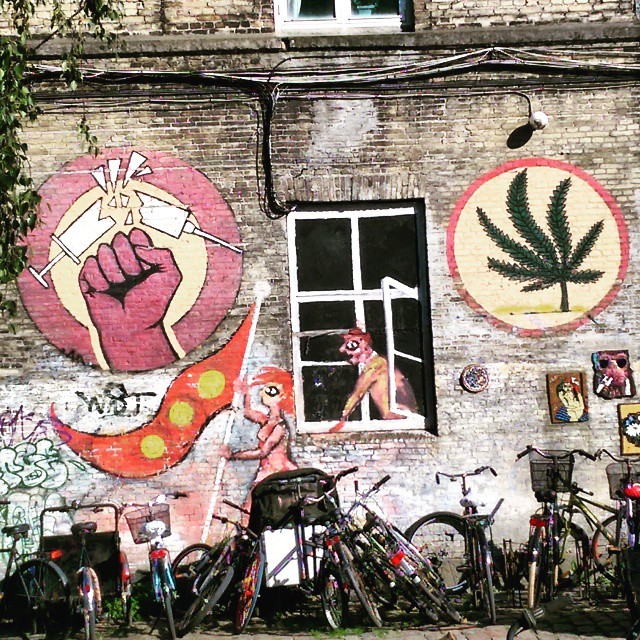 Day 4: Today was another sunny day (our last according to the weather forecasts) and therefore another very long day. After having breakfast at home we went to Tivoli (99kr each). We didn’t go on any rides buy Tivoli was a really nice place to spend a few hours. We had crepes for lunch (at 40-50kr probably the cheapest meal there). After lunch we left Tivoli and walked to Frederiksberg. We tried a flodeboller at another bakery (a mini for 11kr – less than half the size of the one at Lagkagehuset), which was good but not as good as Lagkagehuset. We walked through the park which was very enjoyable. There were many interesting birds and a nice palace (which we saw but didn’t go into). There were also boats where some people were getting a Venice-style gondola ride. Next we walked around Vesterbro and the meat-packing district before taking the train and bus to Norrebro for dinner at Cafe 22 (we found it online). They had great food but best of all we ate outside next to to the water. It was cold but they had blankets – I love how they provide blankets here. In Montreal, as soon as it gets cold all the tables are brought inside. The bill for myself and my girlfriend was 243kr (including 10kr each for water/cover charge) but very worth it for the food, view, and ambiance. After dinner we stopped at Lagkagehuset for a muffin and flodebollers for the next day (did I mention that I am obsessed with flodebollers?). 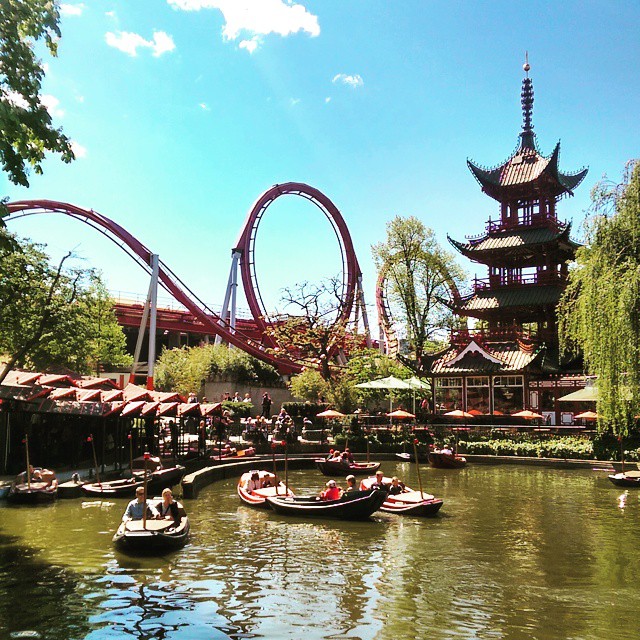 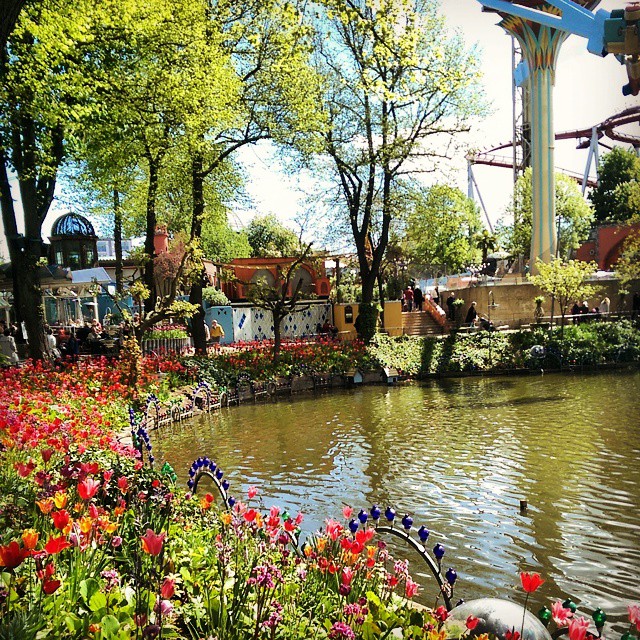 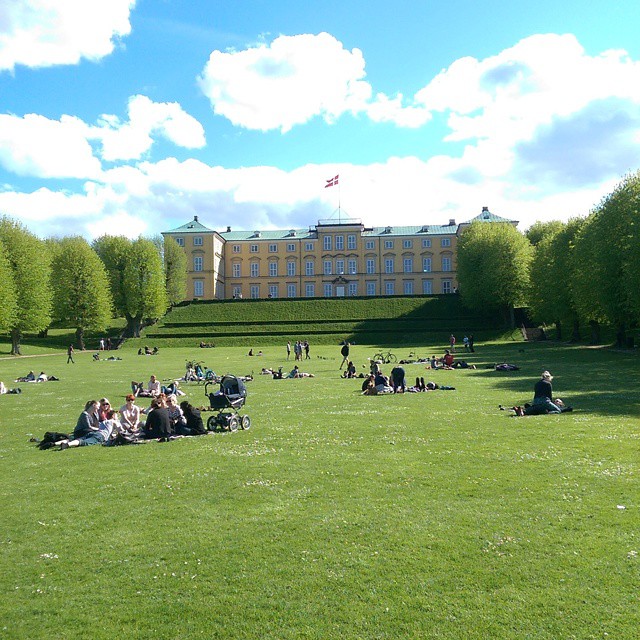 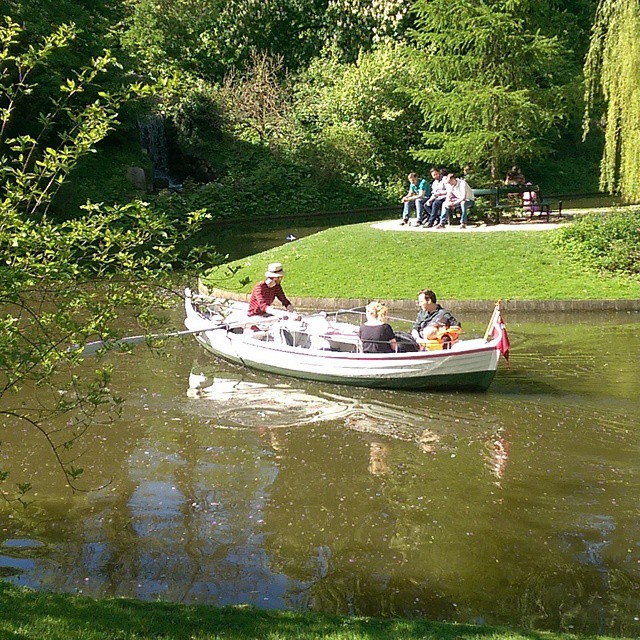 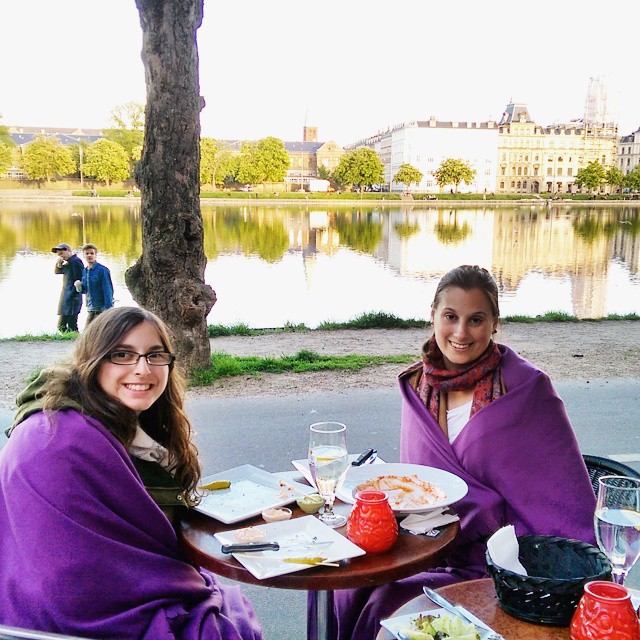 Day 5: Today we went to Malmo for the morning (mostly to add another country to my list). We took the S-train to Copenhagen H and got the 10:30 train to Malmo. We bought the tickets from the machine, 89kr each for the one way trip. We also bought a water bottle from the 7-11 for 23kr (I know…). The train ride was about 30 minutes, and it was fun going over the long bridge.

Malmo was very enjoyable, even better than I expected. We picked up a map at the tourist info centre (right next to the train station) and walked through all the squares (big, little, Gustav Adolf). I love how there are so many pedestrian streets in Malmo. It has a very different feel than Copenhagen – the clothing style is much different (every store in Malmo was an H&M or another colourful mass-market style, as opposed to the simple and stylish black outfit of every Dane), there are more cars, far more immigrants, and everything is much cheaper (many lunch options for ~60 Swedish Krona / 50 Danish kr). My girlfriend bought something at an H&M (technically local even though there are many back home) and then we stopped at a second hand store. I like how second hand stores here appeal to everybody, especially the middle class. Back home the only thrift stores are very high-end ones that appeal to the rich/upper middle class and the Salvation Army type ones that mostly cater to the poor. Anyways, we bought some small frames and I bought a nice leather jacket (which I have been looking for the past few months) for only 450 Swedish Kr (357 Danish Kr).

We continued to the Mollevangstorget square, the hub of the immigrant area. On weekends they have a nice big fruit market. We appeared to be the only tourists there and one of few caucasians. We had planned on finding a good Indian or Asian restaurant for lunch but they all seemed to be empty. Instead we walked to Folkets park which I really liked. There is mini golf, a Ben & Jerry’s, all types of interesting kid’s playground equipment (including an inflatable bouncing thing and a mini bike course), and a big mosque. We then took the bus (free with a train ticket from Copenhagen, though nobody checked) to St Petri Kyrka (church) to go eat at a Latin-American place I found on Wikitravel, but it longer exists. Instead we walked around until we found a Mexican place called Barbacoa, which Americans will recognize as an imitation of Chipotle (and just as good). We walked back to the train station and bought tickets (105 Sw Kr/ 83 D Kr) for the 2:30 pm train.

We got to the apartment around 3:30 and spent the rest of the afternoon relaxing at the apartment. At 8:30 we went to dinner at Madklubben for the birthday of a friend of our friend. The meal was great and the restaurant was very nice. We each only ordered a main dish so the bill was 100kr each. For a restaurant of this quality that’s about what it would cost back home (after adding tax and tip). We got home around 10:30, allowing us to witness a dark Copenhagen sky for the first time in five nights. 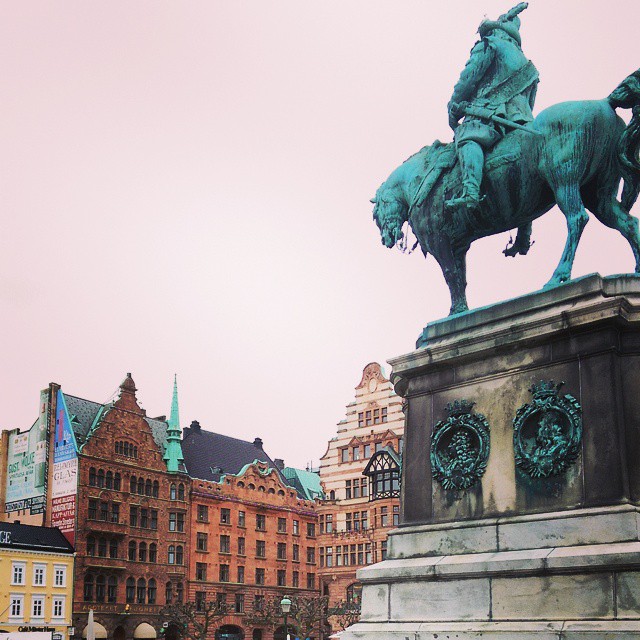 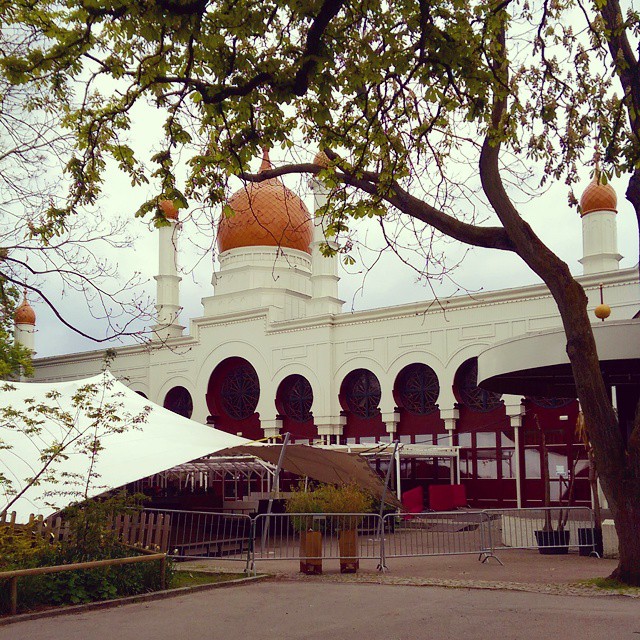 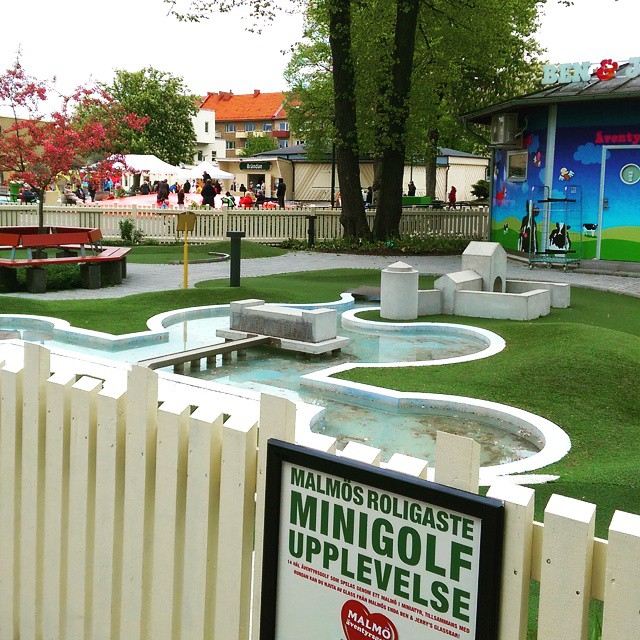 Day 6: Today is a Sunday, so after sleeping in we went downtown since we assumed that elsewhere everywhere would be closed. Surprisingly, everything was open downtown. We spent a few hours walking along the pedestrian streets. We bought some gifts and some overpriced small items at Illums Bolighus, and afterwards we went to Tiger where they had tons of fun cheap little knick-knacks. There we bought a ton of little things for 10-30kr each. For lunch we had a chocolate-stuffed Belgian waffle (37kr) and a Shawarma (40kr), both of which were amazing.

We took the train back home and spent a few hours relaxing. We attempted to walk to a nearby beach, but it started raining and the wind was crazy so we turned back. Finally, we cooked dinner for our last night in Copenhagen.

Day 7: Sadly, our last day in Copenhagen. We left home at 10:00 and after a train and metro we arrived at the airport, where we made our last purchase of flodebollers from Lagkagehuset.