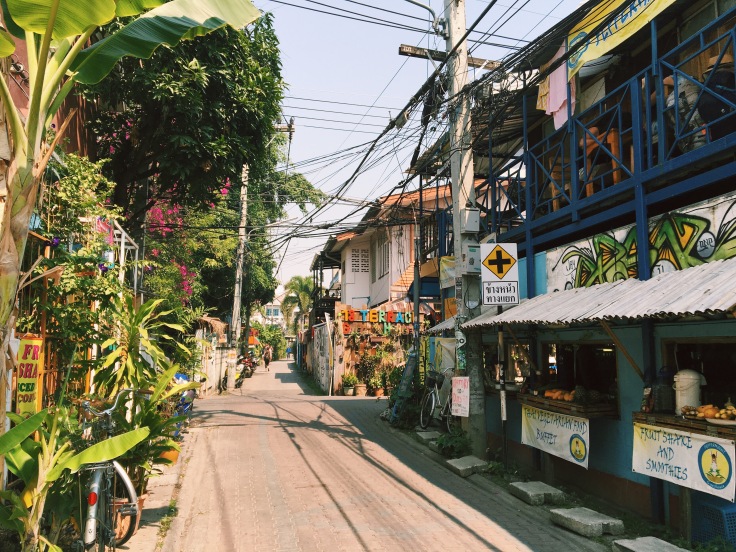 (Michelle again! Matt seems to enlist me only when it’s time to write about foodie cities. Coincidence?)
We arrived in Chiang Mai in the early evening and immediately checked into our hotel, The Britannia. The location was ideal, centrally situated on one of the cuter and livelier alleyways in Chiang Mai.

Apart from location, The Britannia was clean and the staff was friendly. The hotel itself seems to have been built in an old house, and as a result gives off a comfortingly homey, lived-in feel. Rooms were pretty basic, but we had a balcony looking onto the main street so we couldn’t complain. Like in all Thai hotels, the bed was incredibly firm and uncomfortable, but that’s just something you get used to here.

Having settled in, we headed out in search of food. You’ll notice immediately when you arrive that every second restaurant advertises itself as either vegetarian friendly or purely vegetarian/vegan. If you’re a carnivore, have no fear – a lot of places still serve meat dishes, and the vegetarian spots are actually tasty too. The first night we treated ourselves to what would become one of our favourite restaurants, Morning Glory. This little hole-in-the-wall place was about a twenty-minute walk from our hotel along pretty alleyways and lit up streets. Chiang Mai really is a beautiful city and it’s perfect for walkers. When we eventually arrived at the restaurant I was at first hesitant to go in: the waiter was oddly dismissive and the place was a bit dingier than I had expected. Once we were seated, the man provided us with a paper and pen to write down the number of the dishes we intended to order. Strange, since the place was empty and he seemed to speak fluent English. Regardless, we did as we were told and were promptly brought our three meals (because when food is this cheap, why not make every meal a feast?) and a smoothie. Delicious. We made a return visit our last night. And the cost? About $9 CAD for the pair of us.

After our recent trip to Austin, I didn’t think it likely that we would encounter another such foodie city – but that was before we arrived in Chiang Mai. And bonus for Chiang Mai: you can eat all you want, for very little money, and still feel relatively good about yourself. Leaving Austin, we were maybe five pounds heavier than when we arrived (but it was totally worth it!). Not so in Chiang Mai. The food is delicious, dirt cheap, and surprisingly good for you. When we travel we eat mainly vegetarian fare – though Matt isn’t an actual vegetarian – and we usually have some trouble finding restaurants that work for our differing tastes. We either end up at health food places with flavourless or, worse, exclusively gluten-free offerings, or nicer restaurants with few vegetarian options. In Chiang Mai we found a good balance of delicious, healthy, and vegetarian.

Aside from Morning Glory, we would strongly recommend checking out Dada Café for dinner (not strictly vegetarian, good meat options), Juicy4U for lunch (Juicy4U is only open until 5:00pm), and Angel’s Secrets for breakfast (beautiful Western breakfasts, big portions, really adorable atmosphere – we went here every day).

But there’s more to do in Chiang Mai than eating. The city is full of fun little boutique shops (check out Norma Chiang Mai! She makes and designs everything herself and all her jewelry/illustration work is beautiful) and interesting sights. The alleys are always alive with tourists exploring and locals cooking. Though most tourists seem to rent scooters, it’s a great city to explore on foot – both for safety reasons and because of all the great little details you’ll get to better appreciate. 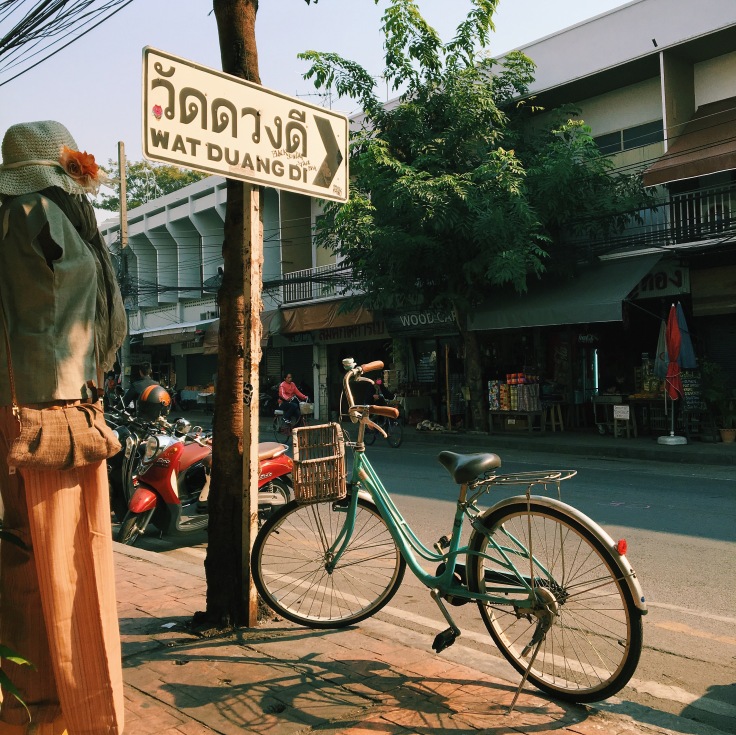 Beyond the city limits there are more adventurey activities to keep you busy. One of our most memorable days of the entire trip was spent at the Elephant Nature Park, about an hour by car outside of Chiang Mai. This elephant sanctuary is one among very few such rescue centers that take in ill-treated elephants and offer them a safe and abuse-free home. While many elephant parks exist around Chiang Mai – and you’ll get a much better deal at any one of them – only Elephant Nature Park and maybe one other have banned elephant rides entirely. Instead, you are offered the rare experience of spending the day with the elephants in their natural habitats. We purchased the Pampered Tour, which allowed us to spend the day with a small group of four or so elephants. Along with eight other individuals, we fed, bathed, and walked with the elephants. 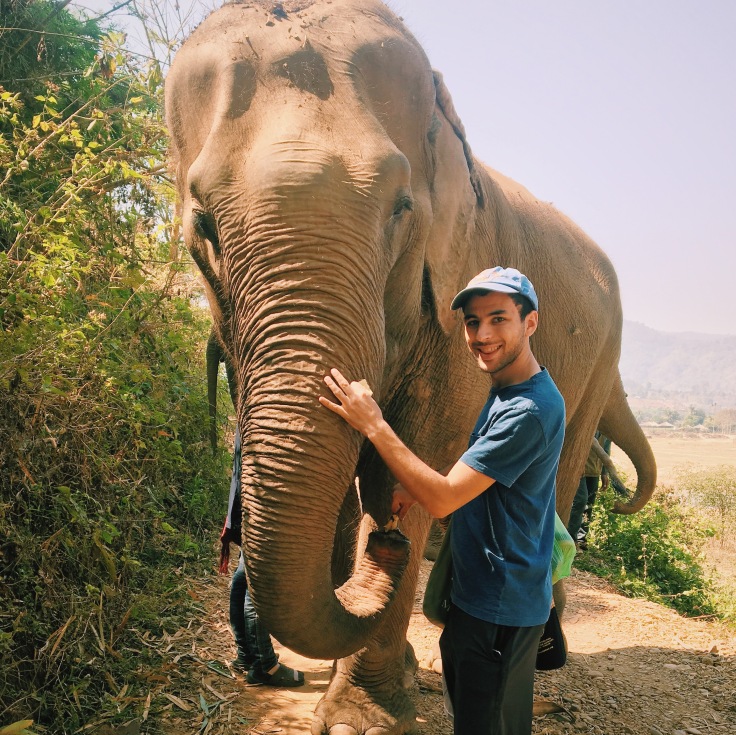 As long as you had food, the elephants were interested and docile. When you weren’t presently feeding them, you had to watch out lest you get stepped on. The elephants are afforded a lot of freedom and will from time to time refuse to go in the same direction as the guides. So caution is somewhat necessary, but also just common sense – don’t walk in an elephant’s blind spot. 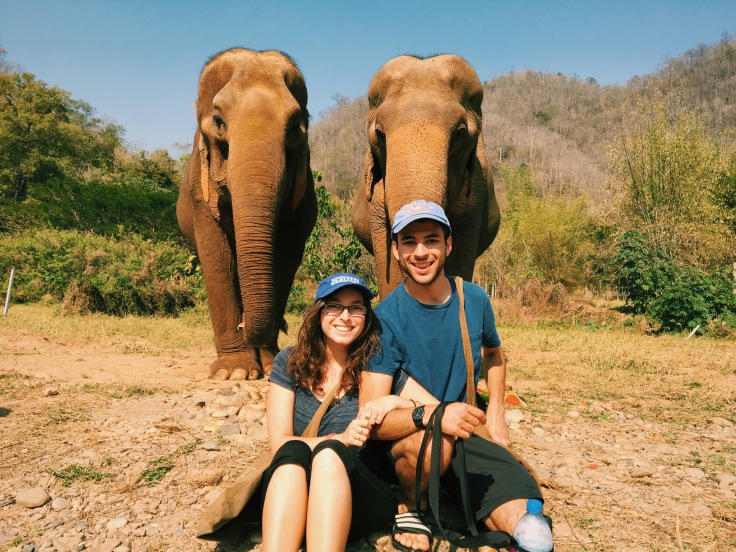 We also got a chance to get some good videos with our new GoPro!

The property is also home to hundreds of dogs. What started as a rescue effort following the 2004 tsunami has grown into a full out rescue shelter for abandoned Thai dogs. Each dog is up for adoption, and visitors are encouraged to make arrangements to bring their chosen pup back to their home countries. Any one who puts the extra time and effort into researching a humane elephant sanctuary, and then pays the higher premium to gain entrance, is likely an animal lover. It is therefore with great difficulty that most of us must say no to adopting the dogs homed at the park. But you can sleep easy knowing that they have good and happy lives pestering the elephants. 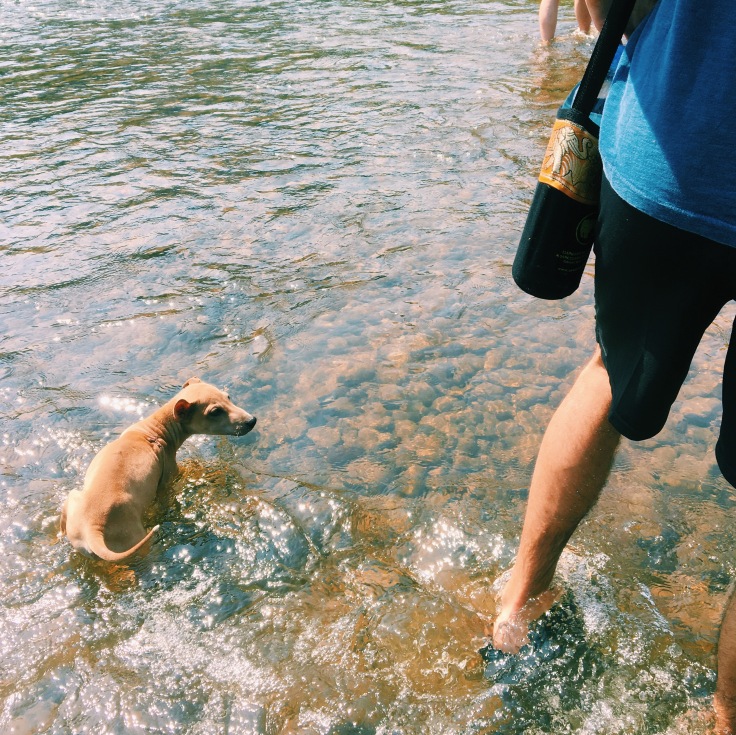 Also a small side note: we met a couple on a later tour that had also visited the Elephant Nature Park. They stayed for the overnight package, which they highly recommended. The woman, though, had been bitten by one of the dogs during her stay. The bite was not too bad, but it’s something to consider when visiting. Many of the dogs have had hard lives in the past and were abandoned by their owners. It’s important to take these facts into consideration before going over to play with them. Most are very friendly, but certainly not all of them. I would imagine the same should go for the elephants, given their abusive backgrounds.
On our last evening we chose to explore the Night Market. Chiang Mai is a moated city, with the older, smaller, more beautiful section in the middle of the moat, and the newer section outside. To get to the Night Market, we had to leave the safety of the moat and venture into the unknown world on the other side of the water. Now I say this obviously in jest, but it is actually a very different experience. In the area we stayed in (in the moat), the streets were small and quiet, the alleys were welcoming, and the people were respectful. Outside the moat the streets are littered with bars, drunken frat boys, and the occasional prostitute. I’m sure there are nicer areas, but in our limited experience we didn’t much like the world outside the moat. As for the Night Market, it was crowded and touristy and definitely not worth the walk. We were very happy when we crossed the bridge back to our side of Chiang Mai.

Overall, Chiang Mai was an incredible destination. From our first day both Matt and I agreed that we wanted to live in the city for a few months – and we hope at some point in our lives we’ll be able to make that happen. It’s a city rich in culture and delicious food. Could use some more monkeys though.