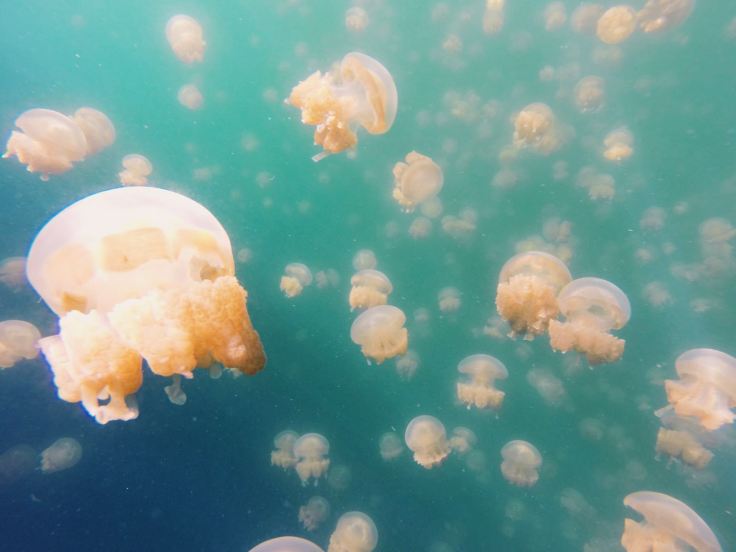 Although getting to Palau was very time consuming, and staying there was expensive, it was all worth it for the chance to see the incredible Rock Islands and the famous (by Palauan standards) Jellyfish Lake.
We went on two full-day tours: a Kayak + Jellyfish Lake tour ($95 each) and a South Rock Islands tour ($119 each). Both tours were booked with IMPAC, a Japanese tour operator. Based on our experience, I would definitely recommend IMPAC for any non-divers. In all my research they were the only place I could find that offered more than one snorkelling tour. Our Jellyfish Lake tour consisted of us, one other English-speaking couple (coincidentally from Ottawa), and about 20 Japanese people. The lunch, a Japanese bento box, was very good and they can make it vegetarian. The tour had one Japanese guide and one English-speaking Palauan guide, so we essentially had a semi-private tour. Even though there were around 20 in our group, it never felt crowded. The Japanese group sticks together like glue, so us and the other Canadian couple always had the rest of the ocean/lake all to ourselves. Grant was our tour guide, and he was pretty amazing. He knew the best places to go for sights and seating, and he always took us to these places right away. This meant that we got there in front of the Japanese group and had various locations all to ourselves for a few minutes before the rest of the group could arrive. He was also very happy to take pictures and videos of us everywhere. Speaking of which, we brought our newly purchased GoPro, and got our money’s worth on our first day here. An underwater camera, or even better a video camera, is very helpful in Palau. You should buy a floating selfie stick that straps around your wrist, so you can keep it with you while swimming without worrying about dropping it.

The Jellyfish Lake tour was incredible. We had five stops: The Milky Way, Kayaking at a marine lake, lunch on a beach, Jellyfish Lake, and Cemetery Reef.
We were picked up from our hotel and driven to their office, where we paid for the tour and the $100 Jellyfish Lake permit (which goes to the government, not the tour operator). The permit is cash-only which we were not aware of, but they were happy to lend us the $100 until the next day. We picked up our fins and lifejackets before getting on the boat and heading to our first stop, the “Milky Way.” We got our first look at the Rock Islands, the hundreds of mushroom-shaped small limestone islands dotting the ocean. The water colour is ridiculous, with so many shades of blue.

The Milky Way is in a very scenic location between some islands, but the main attraction is the limestone “mud” on the ocean floor which is supposed to do wonders for your skin. The guide dove down and filled a bucket with the mud before we all got to slather it all over our bodies. We got to cover ourselves head to toe, take pictures, and then jump in the water to wash it off. Though it’s a pretty obvious touristy gimmick, it was a very fun quick stop. 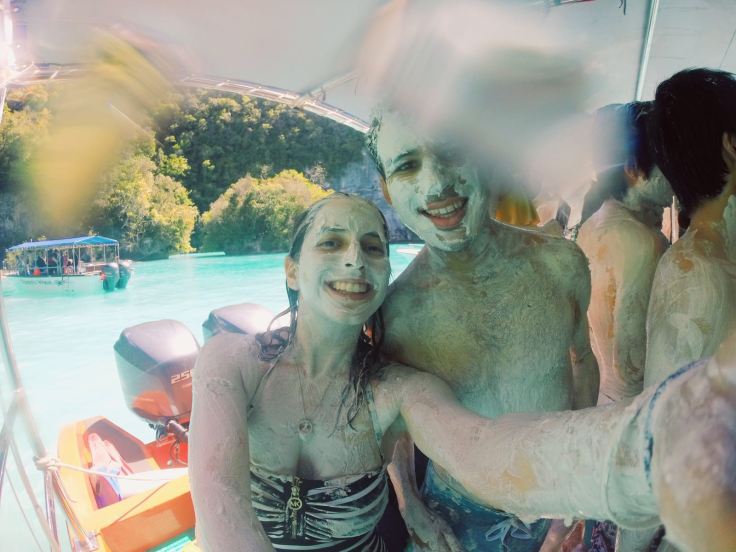 Next up was kayaking. We took the boat to a dock in a beautiful “lake” (really a well-sheltered part of the ocean) surrounded by islands. We all got in our kayaks, exploring the area and taking pictures for a little while. Our small group (us and the other Canadians) went with Grant ahead of the Japanese group, which moved slowly and together, so we’d have 5 minutes or more at each place before the others arrived. We kayaked to a tiny beach, where we docked our kayaks and swam in the very shallow warm water. From there we kayaked along the coast until we reached a small arch leading to another hidden lake. A very pleasant and beautiful kayaking trip, so if you go to Palau make sure to take a tour with a kayak stop. 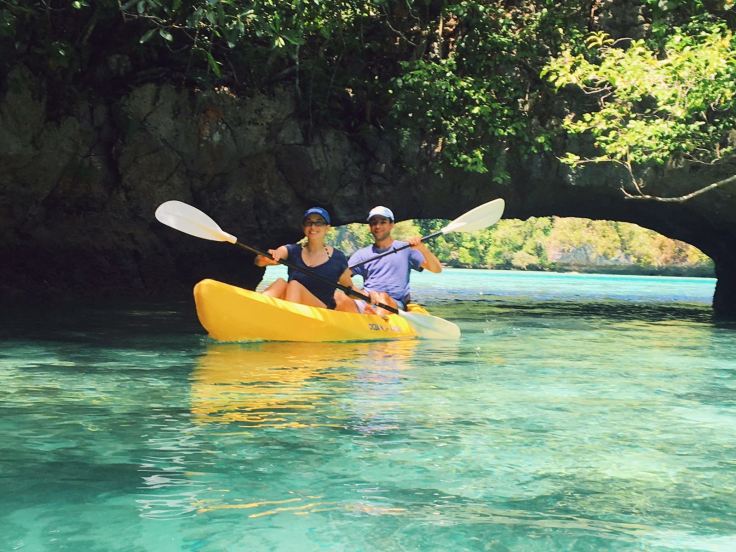 From there we took the boat to another island, where we had our bento box lunches at tables along the beach, along with all the other tour groups that also stop at this island. Compared to the rest of Palau there’s nothing too remarkable about this beach, but the lunch was excellent.

Next up was the main attraction of the tour (and the country – and maybe even of our entire trip), Jellyfish Lake. The lake is only connected to the ocean through fissures in the limestone, so no big fish can get in. Since the jellyfish have no natural predators in the lake, they thrived and multiplied until they numbered in the millions. Thanks to 12,000 years of evolution they also lost their ability to sting, which is a very good thing for us humans.
From the boat we had an approximately eight minute hike to the lake, and then an eight minute swim to the far side of the lake, where they have a higher concentration of Jellyfish. Both the walk and the swim might be considered a bit difficult if you are older or not used to hikes/swims. Along the way we saw a few lost jellyfish and had to force ourselves not to oggle them for too long. They are so incredibly beautiful and interesting to look at and touch (so soft!). When we arrived at the far side of the lake, there were thousands within sight. I had seen the pictures, but I didn’t expect that there would actually be so many when we showed up. It’s truly like swimming in an aquarium. It’s unbelievable that this actually exists in nature. 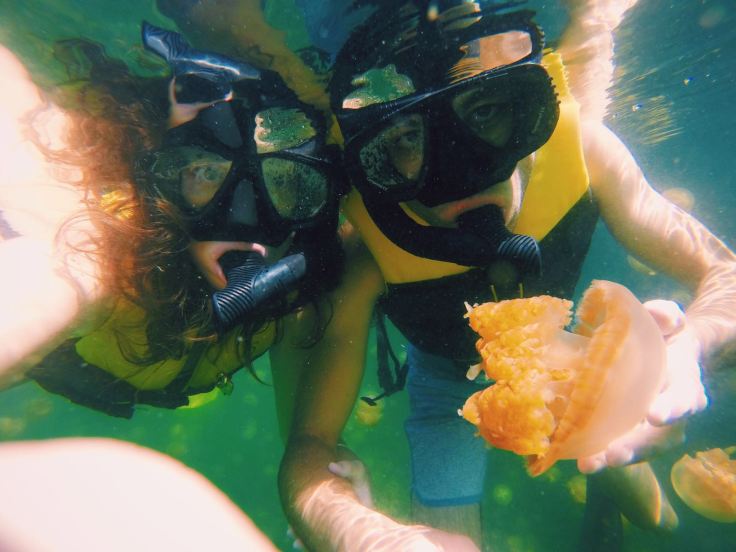 We had about 45 minutes in the lake before swimming back to the dock and hiking to the boat. The last stop was snorkelling at Cemetery Reef. The snorkelling was, again, really incredible. There were tons of fish, but the coral reef itself was a highlight. It’s huge and colourful and not at all damaged by humans.

We took the boat back to Impac’s office and after about ten minutes waiting were picked up by a van which took us back to our hotel. A long but very successful day.

Our second tour was the South Rock Islands tour, also with Impac. We went to Clam City, the Big Drop Off, Carp Island, and Long Beach.
We started off with a long (about 25 minutes) boat ride to Clam City. Luckily, this is the Rock Islands, so the longer the better – I’d be happy just admiring the scenery from the boat all day long.

Clam City was a fun quick stop, where we got to see some humongous clams. There’s not too much else to see, but it was worth a short visit. On a side note, it was a relatively windy day when we went which made it difficult to comfortably snorkel. At Clam City this wasn’t too big an issue – there’s no coral that you could potential bump up against. But at the Big Drop Off, we had some issues! 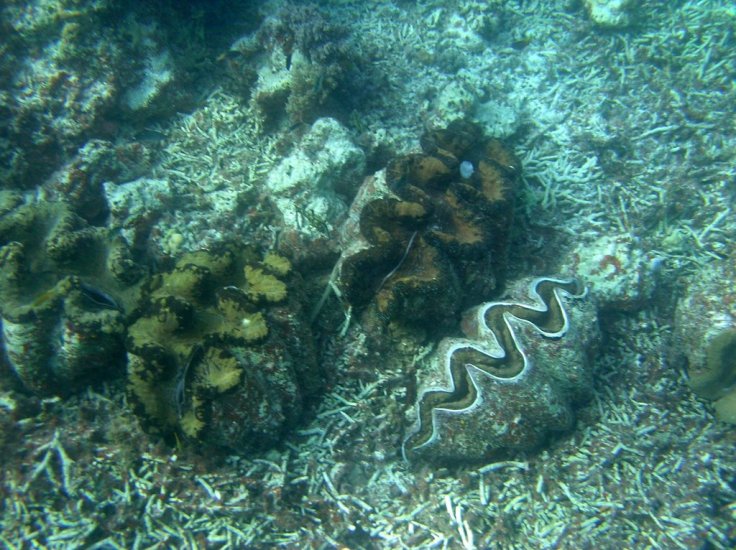 From Clam City we drove through the German Channel (a channel going through a big reef, giving you a nice opportunity to admire the dramatic changes in water colour) to the Big Drop Off. Like I said, there was a bit of a storm and the water was pretty rough, which didn’t make for easy snorkelling. We had to be constantly fighting the current which was trying to push us onto the reef, as well as bracing ourselves for waves which would go over our heads. Unfortunately, it wasn’t the best snorkelling experience we’ve had, but only because of the weather.
Apart from the bad conditions, I could only describe the Big Drop Off as mind-blowing. We snorkelled on the edge of the reef, which starts a foot or two below the surface and descends for 900 feet. The abundance of fish and coral is unlike anywhere else I’ve ever been; it’s almost too much to take in.

We snorkelled along the reef for a tiring 30-40 minutes before getting back in the boat and heading to Carp Island for a 2 hour break for lunch and some relaxing beach time. Carp Island was really nice, and lunch was amazing. In addition to a huge BBQ (they even grilled some vegetables just for Michelle), we each got a bento box.

From Carp Island we went to “Long Beach,” a big sand bar surrounded by islands and turquoise water. We spend about 45 minutes walking around in the shallow water and playing with all the sea cucumbers that you can pick up off the sea floor.

Overall, we had a great day of sightseeing, snorkelling, and relaxing. It wasn’t nearly as “epic” as the Jellyfish Lake tour, and we were a little disappointed by the weather and rough snorkelling conditions, but it was still very worth it.

Although we only had two days on the water, we got to see a lot of Palau – in fact, I would have come just for the Jellyfish Lake tour. This is definitely a place you need to add to your bucket list!