For this trip we’re starting with the best part – flying Cathay Pacific first class! As mentioned in my previous post, I booked Boston-Hong Kong in first and Hong Kong-Johannesburg in Business for a total of only 70k Alaska miles and $75 USD in taxes and fees.

To get from Montreal to Boston we rented a car one-way from Avis for $70 CAD, surprisingly cheap for an international drop off. We left Montreal at 5:00 pm and sat in traffic for much longer than expected, but still got to Boston by 11:30, with more than enough time to catch our 1:45 am flight – the airport was empty. Cathay uses the British Airways first class lounge in Boston, which was small and mediocre, although it did have a few good snacks. I think it’s better during the day (before the BA flights have left), when you can get table-service dining in the first class lounge. If the lounge is important I would try to get a daytime flight from JFK, where they also use a mediocre BA lounge, but it should be better during the daytime. Or even better, fly from Hong Kong instead of to Hong Kong, where you can use “The Wing” first class lounge, one of the best first class lounges in the world. Unfortunately our flight from HKG is in business (there’s no first class cabin on the route to JNB), so we’ll have to “settle” for the also-amazing business class side of The Wing.

We boarded our flight at around 1:05 am and got our first look at our homes for the next 16 hours. The first class seats (they call them “suites”) are absolutely incredible. The entire first class cabin is only 6 seats, two rows of three across (as opposed to nine across in economy). The seats are humongous. They are literally three feet wide and can fit two small people (such as ourselves) sitting side by side.

When I wanted to talk to Michelle (our seats were next to each other, yet 5 feet apart and separated by two big privacy walls), I would sit on her ottoman, which actually had a seatbelt. Although small, I found it more comfortable than an economy seat. I honestly would have paid 140k miles for just the one first class suite, if we were allowed to have two people in one suite for the whole flight!

We were each given an amenity kit (one for males and one for females) and pajamas – without us noticing, the flight attendants estimated our sizes and got them for us. They were really soft and comfortable – I’ll definitely be keeping them forever. We were also offered caviar, a too-fancy-for-us amuse-bouche and a glass of expensive champaign, but since we are children we had to turn it down. So much value being wasted!

Our flight attendants, Jane and Coco, were very nice and quick to get us anything we desired. It’s amazing that there are two flight attendants completely dedicated to five first class passengers – us, an American father and daughter, a single Chinese man (or maybe Chinese-American, he never spoke), and one vacant seat. 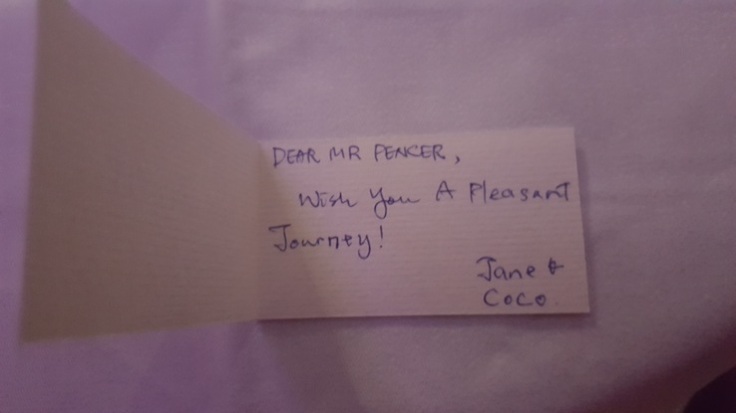 Since it was then two in the morning we were feeling pretty exhausted, but decided to have dinner anyways in order to maximize the amount of meals on the flight. I didn’t want to have dinner alone so I sat on Michelle’s ottoman, and the flight attendant set up an extra large table for two between us. Yes, really. Our suites were so big, there was more than enough room for a table for two.

We started out with a very tasty plate of nuts and a big bread basket. I thought it was for sharing, but they brought out a second, which I refused in an effort to save room for the main course. The appetizer was supposed to be soup, but unfortunately there was too much turbulence so we had to skip it. We passed on salad and went straight to the main course. Michelle ordered pasta and I ordered the sea bass, which was incredible.

By this point we were too full and tired for dessert, so we decided to skip it and have dessert in the morning when we woke up (that’s normal, right?). We put our seats in the lie-flat position and the flight attendants took out mattresses, sheets, and covers and made our beds. The bed was as big as and more comfortable than most hotel beds.

When we woke up I ordered a “snack” of a huge bowl of soup, which was good but not amazing. Michelle and I both ordered the desserts from the main course, which we had skipped earlier. In first class, you can order anything at anytime! The desserts were cake and ice cream, which were both delicious.

As with business class, you finish with a chocolate. In business, they go around the cabin letting you pick a chocolate out of the box. In first, they give you a bowl filled with a dozen chocolates. And Haagen Dazs ice cream is always available!

I spent a few hours watching movies before breakfast, which was multiple courses and very good (though I find that eggs on a plane are never as good as on the ground). After breakfast, we ordered seconds of the dinner dessert, because why not?

Unfortunately, all good things must come to an end, and we landed in Hong Kong around 4:30 am, about an hour ahead of schedule. I wanted to complain and demand that they keep flying the plane, but figured that wouldn’t get me anywhere. Luckily, in Hong Kong they have an arrivals lounge, available to first and business class passengers. It’s a small lounge with a small breakfast buffet, but they have about 10 shower rooms, essentially a large luxurious private bathroom. I didn’t expect to care so much, but showering after a long flight is pretty great. 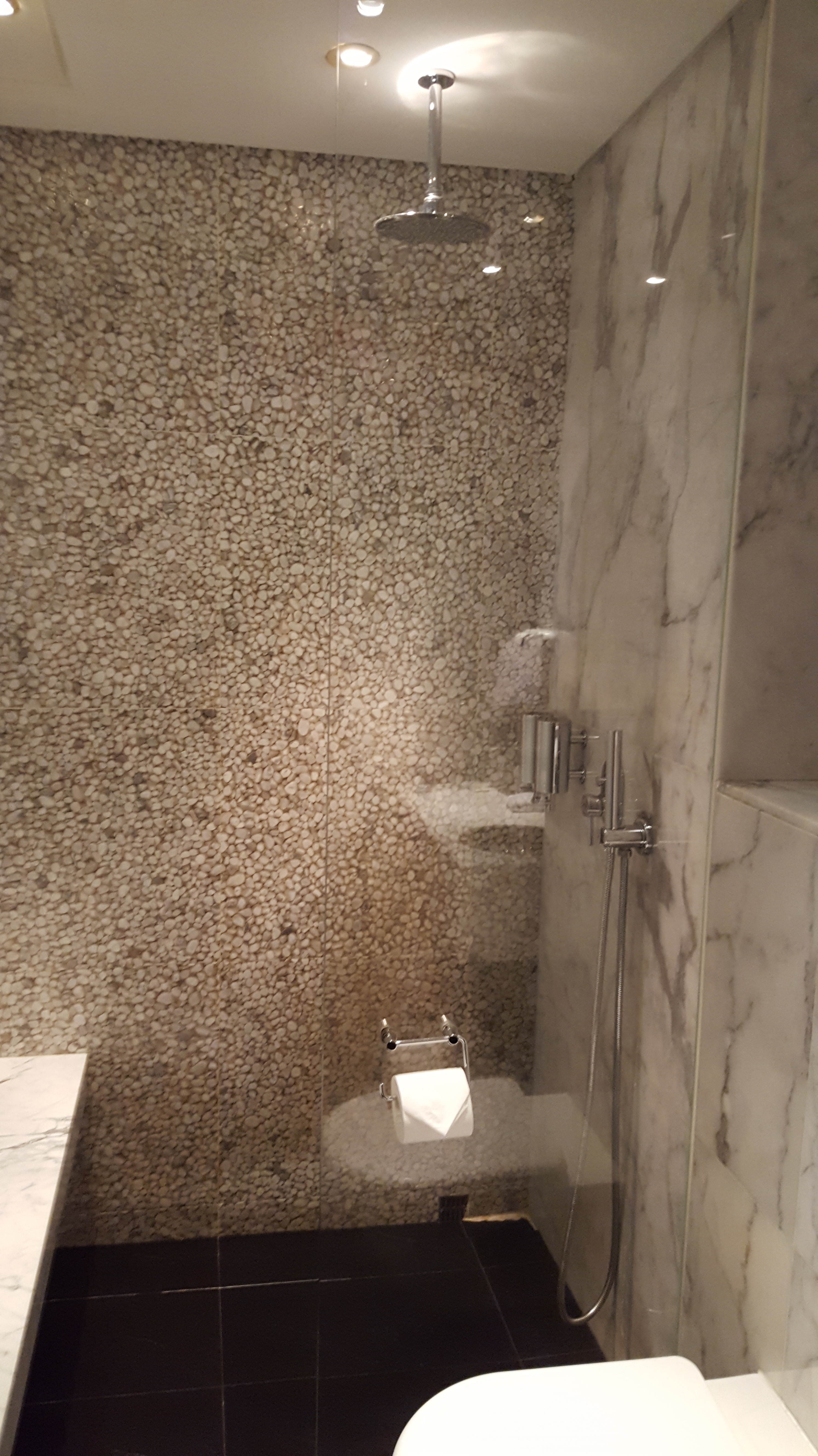 Before the flight, I thought that first would be a slightly more luxurious version of business class, but it’s a whole different world. I didn’t really notice until our next flight, a 12 hour business class flight with Cathay. We had a great pod, but in comparison it felt tiny. The meal service wasn’t when we wanted it, the flight attendants didn’t know our names, and we only got one small chocolate each! #firstworldproblems

The moral of the story: if you’re booking a flight last minute, you must try to book with Cathay Pacific using Alaska miles. 70,000 points to almost anywhere in the world in crazy luxury!