Day 4: From Tokyo Station we took a short cab ride to our hotel, the Daichi Hotel Annex. For the afternoon we decided to take the metro to Akihabara, which was a lot of fun. All the signs and sounds are a bit of an overload to the senses!

Day 5: After breakfast we took the metro over to Shinjuku and spent a few hours there, walking around the area surrounding the Shinjuku Station. 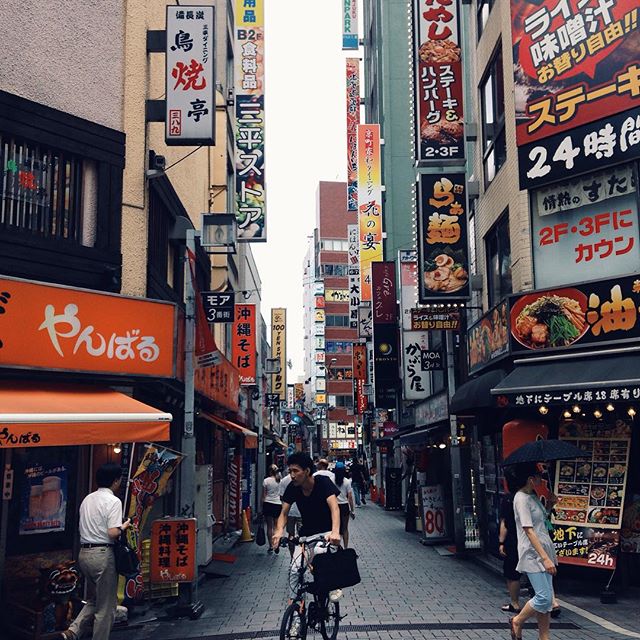 Afterwards we took the train to Harajuku, which was way busier than we expected but a lot of fun! Lots of interesting small shops, and other interesting places like a store filled entirely with photo booths, many of which had long lines and piles of accessories. Not something I’ve seen back home! We walked along the main street in Harajuku and then to Meiji,Jingumae Station, where we took the metro back to Shinbashi, a short walk away from our hotel.

In the evening we took the metro to Shibuya, which was a nice place to see Tokyo all lit up. We walked around for a little and had dinner before heading back to the hotel. We also made an obligatory stop at the statue of Hachiko, who has an amazing story that you should all read about.

Day 6: We spent the morning walking around Ginza, near our hotel. It was a nice walk with lots of interesting streets and architecture. It is mostly filled with high-end stores so we didn’t go in anywhere except Hakuhinkan Toy Park, which was fun to see, even for adults.

Afterwards we took the train to Shimokitazawa, which we had read was a nice area to explore. In fact, it far exceeded my expectations – lots of interesting little stores, good restaurants, and not too crowded. For a late lunch we got Udon noodles, which were very tasty, large, and cheap. I highly recommend a visit to Shimokitazawa, even though it’s a little out of the way. I would rank it as my favourite area in Tokyo.

For the evening we went to Odaiba. The train ride there was amazing, with great views of the Tokyo skyline and the Tokyo Tower. Once there we walked to Aqua City and did some shopping. For dinner we went to the Monsoon Cafe, which is in this nice fake-outdoors restaurant “alley” on the fourth floor. The restaurant itself had good food, and we sat (on the ground) at a traditional Japanese table, which were right next to large windows with a great view. Overall, I loved Aqua City. I’m not really a mall person, but this is my favourite of the many malls I’ve been to. Lots of fun stores, tons of restaurants, and a nice place to walk around.

After dinner we walked to Diver City to see the robot statue, which was even bigger than I expected. Then we walked back to the station and took the train (very busy, even after 10pm) back to our hotel.

Day 7: We were able to cover a good amount of Tokyo in our first two days, so there was nothing specific we wanted to see on our last day. So we made a last minute decision to go to Disney (we’re very big Disney fans). We have gone to Disney World in Florida many times, so we decided to go to DisneySea, which would be more of a unique experience than DisneyLand. I read a ton of amazing reviews I’ve read online, many of which said DisneySea is the best in the world. I won’t go into too much detail since there are already tons of reviews. I will say that it wasn’t as great as some of the reviews made it out to be, although it is still worth a visit. It doesn’t have the full “Disney Experience,” at least compared to Florida. I would describe it as a really great theme park with good rides, impeccably designed and decorated, with a little bit of Disney thrown in.

Day 8: We woke up early and took a 7 am bus from our hotel to Narita for our 10:45 flight. We got breakfast at the airport, which was ok. I was shocked by how few options there are post-security. Probably the lowest “restaurants to airport size” ratio of any airport I’ve been to. The flight itself was an ANA flight to Chicago. The width and legroom were pretty good for an economy seat. My only complaints are the food (I didn’t like whatever the Japanese meal was so I ordered the Western meal – it was terrible, the worst of any of the many airlines I’ve flown) and that the tray was very dirty, which was surprising given that it’s a Japanese airline. But to make up for it, we got a little peak at the Northern Lights midway through the flight, which was a nice conclusion to the trip!