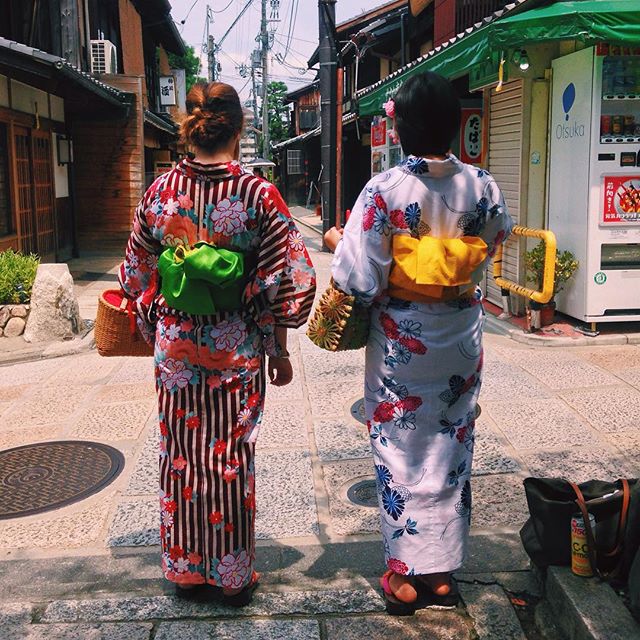 After Hawaii and Guam, our final destination was Japan, where we had 7 nights. We flew into Osaka and spent 3 nights in Kyoto, then took the bullet train  to Tokyo, where we stayed 4 nights before flying out of Tokyo/Narita Airport.

Day 1: We arrived at KIX and went to the train station to buy tickets to Kyoto. The line was short and we bought the Icoca & Haruka package, 3030 Yen ($1 CAD = 100 Yen) for a one way ticket and a Y2000 bus card. From Kyoto station we took a cab to our hotel, the APA Gion. The hotel was very nice, and in a great location right between “old” and “new” Kyoto.

Day 2: We spent the morning exploring the old parts of the city near our hotel. In addition to spending a lot of time wandering along the streets, we saw the Yasaka Shrine, Kodaji, and Ryozen Kannon. After returning to the hotel for a break from the midday heat we went for lunch at the Nishiki Market. We planned on eating at Kyoto Gogyo, but we arrived just after 3 and missed lunch so we went elsewhere. Instead we made a reservation for that night, and we were told that each of us must order a meal and drink. On our way back we went into some stores on Shijo Dori, then spent more time near our hotel. For dinner we returned to Gogyo, which was very good. However, we had a big communication problem – after all but one of us ordered ramen, we were told that ramen does not count as a meal and we needed to order something else. This is ridiculous considering that it is the most expensive food item on the menu, and all the other food items count as a meal! Anyways, we refused to order more (since we all had large bowls of ramen in front of us) and eventually they gave in.

Day 3: In the morning we decided to walk to the Imperial Palace. In hindsight it was not a good idea, since the walk was long and not that interesting, and in the end all the tours were sold out so we couldn’t go either way. Instead we took the bus to the Kinkaku-ji (Golden) Temple, which was beautiful. From there we took the bus to Ryoan-jo, which was a nice temple with an interesting rock garden.

By this point we were pretty tired so we took the bus back to our hotel and ate take-out from a nearby Lawson’s for lunch (I love Japanese convenience store food). For dinner we found somewhere in Pontocho Alley.

Day 4: We checked out of our hotel and took the bus to Kyoto Station. I went to a machine to purchase tickets for the Shinkansen to Tokyo. The machine wouldn’t take my foreign credit card so instead I waited in line to see a person. The line took about 25 minutes, moving very slowly at times since some people took 5-10 minutes to buy their tickets. Luckily I was able to purchase tickets at the counter with my credit card so we were on our way. We got onto the next Nozomi train at around 9:15 am, and the train was pretty full. At first my girlfriend and I had to sit apart from each other, but we were able to get seats next to each other after the first stop. Otherwise the train ride was nice, though I got a little nauseous. It was a little cloudy so we didn’t get a view of Mount Fuji.

Overall, Kyoto exceeded my expectations. There is so much old Japanese history right in the middle of the city. All you have to do is walk around, and you’ll see shrine after shrine!
One more thing: Kyoto is very, very hot during the summer. Luckily, there are outdoor vending machines selling cold bottled water at literally every third block!

One thought on “Japan Part 1: Kyoto”