Part I of our RTW Trip: The Turkish Airlines Business Class Experience

As some of you may know, Michelle and I have just started our Round-the-World (RTW) trip! We will be travelling to Cairo, Thailand, Cambodia, Palau, Tokyo, and Beijing. Of course, our flights were booked through Aeroplan, so we’re only out of pocket $200 each (for taxes and surcharges). And since credit card signup bonuses allow me to earn tons of Aeroplan points, we booked our flights in Business Class! An incredible value for our points, considering that this RTW Business Class ticket would normally cost over $10,000. Later, I will write a post explaining in detail how we booked this very complicated itinerary. But for now, time to start talking about the actual trip instead of how we booked it.

Our first destination is Cairo, and we’re flying Turkish Airlines from Montreal to Cairo, with a 9-hour layover in Istanbul. But instead of this being a hellish 21 hours of travelling, flying business class on Turkish Airlines is an experience in itself, meriting its own post!
Up first is a 9.5 hour overnight flight from Montreal to Istanbul, departing at 10:45 pm. We boarded quickly and got to our seats, in row 1. We were offered some juices right when we sat down, and then I spent the next ten minutes exploring all the different ways I could adjust my seat, looking through our super-fancy amenity kits, and admiring the huge TV screens we had. Speaking of which, the selection of movies was incredible – at least 20 good, recent movies that I wanted to see. Way more Hollywood movies than Air Canada, and they’re from Turkey! I settled on The Martian, which lasted just long enough to take us through dinner. 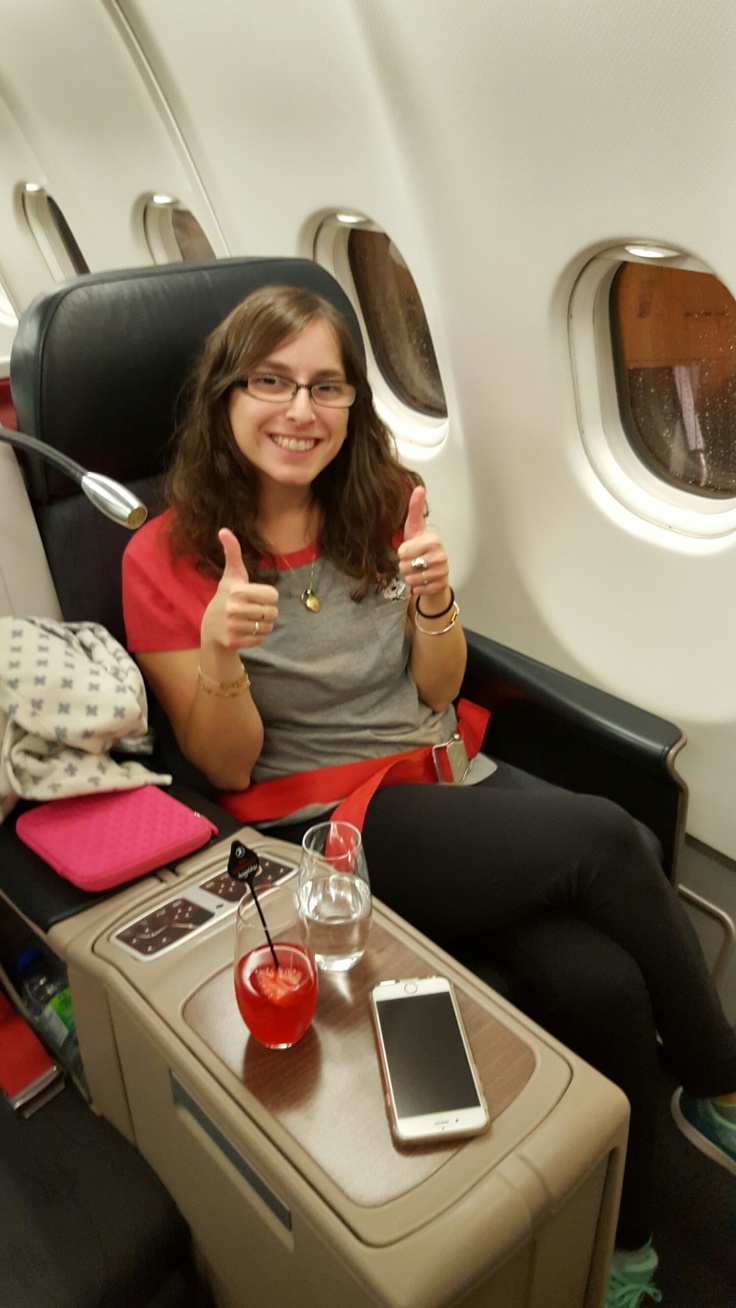 Shortly after take off, the flight attendant came to give us our menus. A great selection of choices.

They even gave us breakfast menus, where we ticked off our choices, which were brought out to us the second we woke up the next morning.

The chef (yes, there’s an actual chef on the plane! Turkish is well know for their amazing food) came out to take our orders. Shortly afterwards, the flight attendant came back to set up our trey tables, and gave us our drinks, cutlery, bread, a selection of spices, and a bowl of nuts. And last but not least a (electronic) candle, so we could have a “Candlelight dinner high above the clouds.” 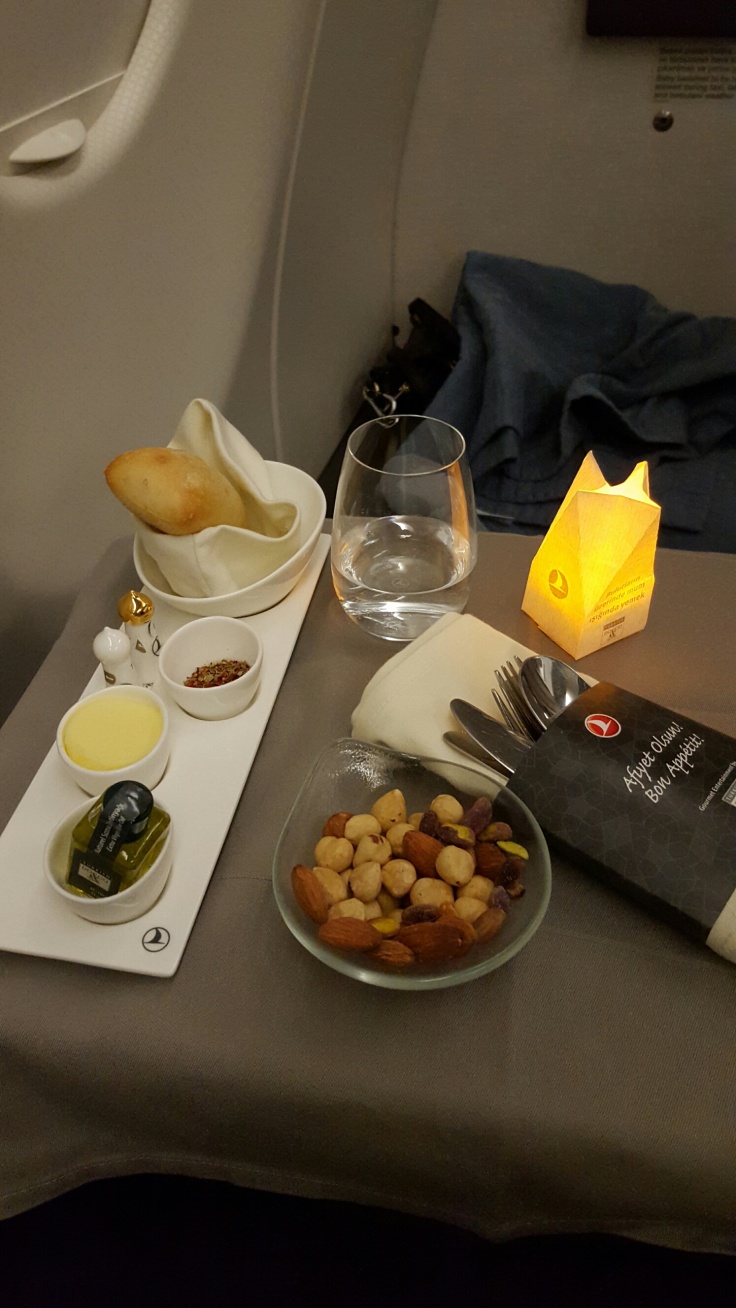 Next up was the food! The appetizer, main course, and dessert were brought out over a period of around 90 minutes, which was perfect to digest all the food, though it did mean we had to stay up until 1 am (Montreal time).

After dinner, it was time to get some sleep. Luckily, we had lie-flat beds! When we were ready, the flight attendant brought out a blanket, pillow, and small mattress, and set up our “beds.”

After 4 or 5 hours of sleep, I woke up and was immediately brought my breakfast.

By the time we finished eating, we were practically there. I was very displeased to find out that we would be landing early – I didn’t want to leave the plane!

Since we were arriving so early, our 9 hour layover became 10 hours. When I first booked our flights, I considered using our time to see Istanbul, but I decided against it. We were arriving too late to get much daylight, and more importantly a visa costs $60 USD ($84 CAD) each! But if you think that spending 9 (or 10) hours stuck in an airport sounds like hell on earth, you haven’t heard of Turkish Airlines’ 63,000 square-foot business class lounge, the largest lounge in the world. I used to think that Maple Leaf lounges were the best things ever, but no longer. This lounge has ten different stations with chefs cooking made-to-order food, big salad bars, and an infinite number of dessert stations, with amazing Turkish (Baklava!) and Western (Chocolate cake! Apple pie! Strawberry cheesecake!) options. 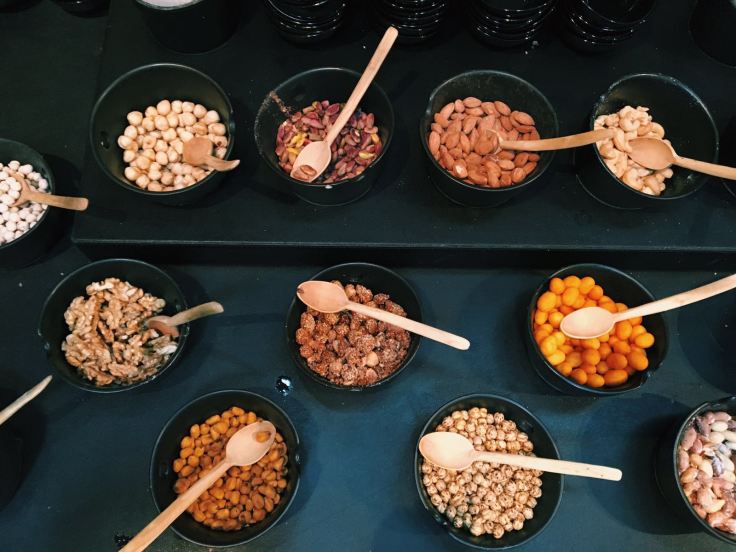 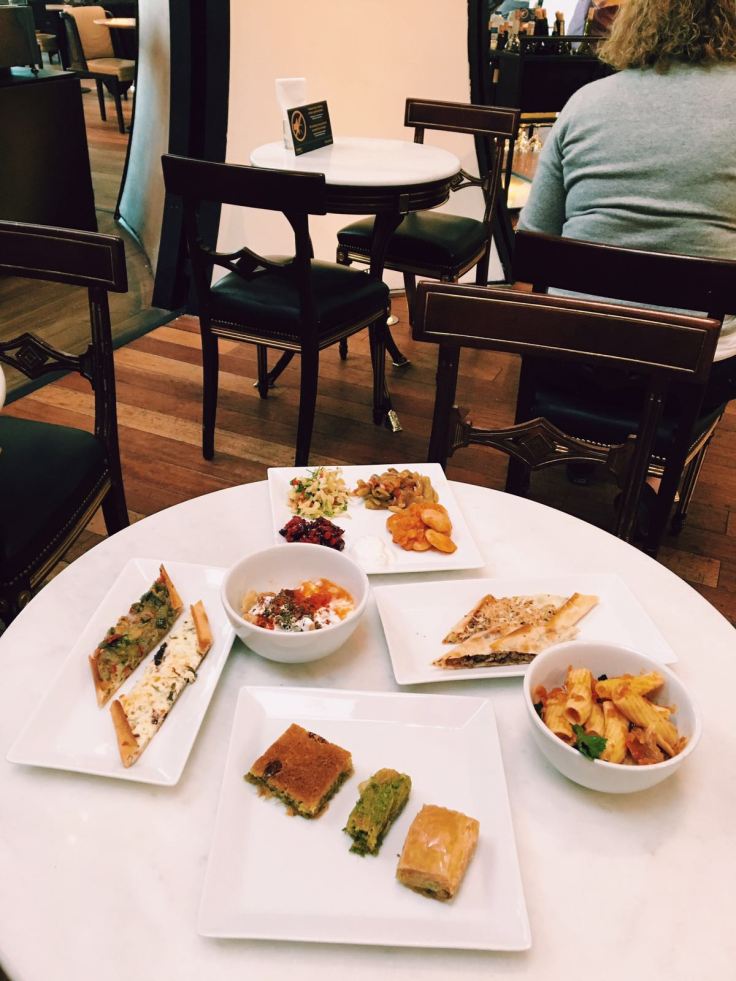 If you somehow get bored of sitting in the comfy chairs and eating tons of food, there is a golf simulator, a miniature race-car track, PlayStations, showers, and suites (only if your layover is 4-7 hours).

Or you can just wander around and admire the decor. 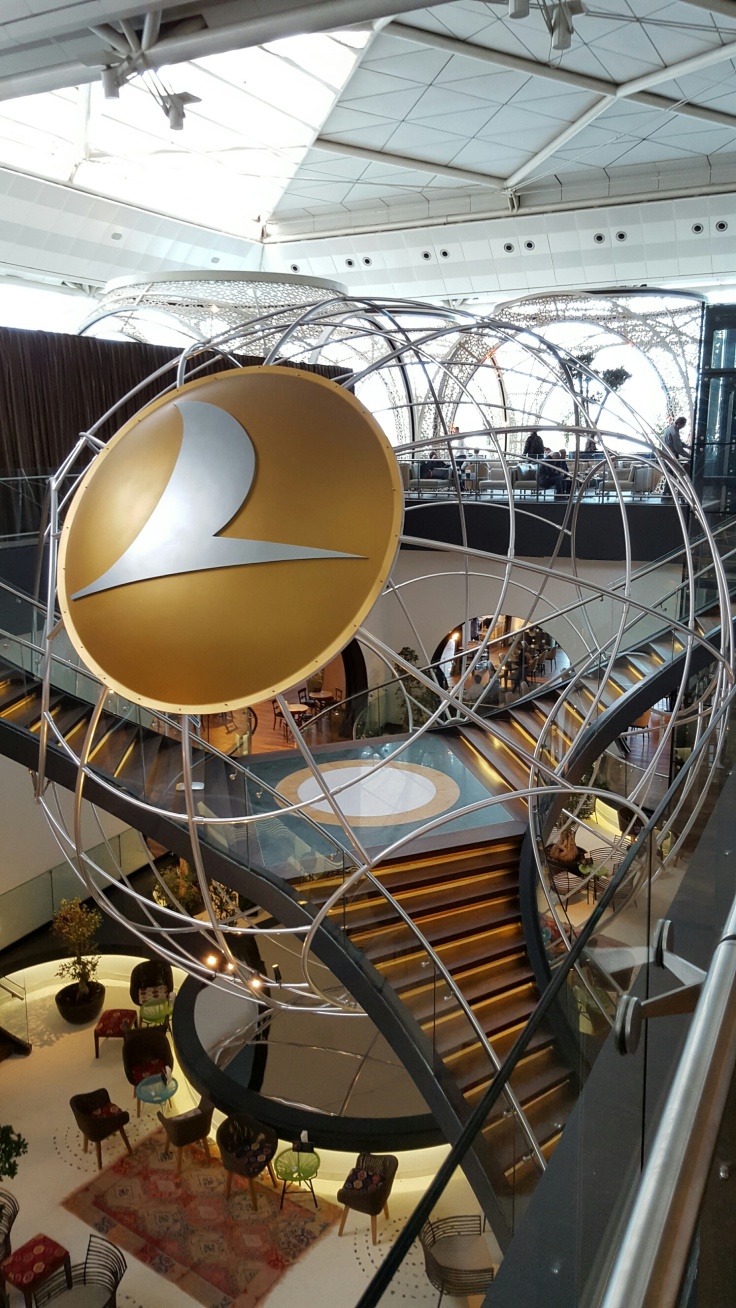 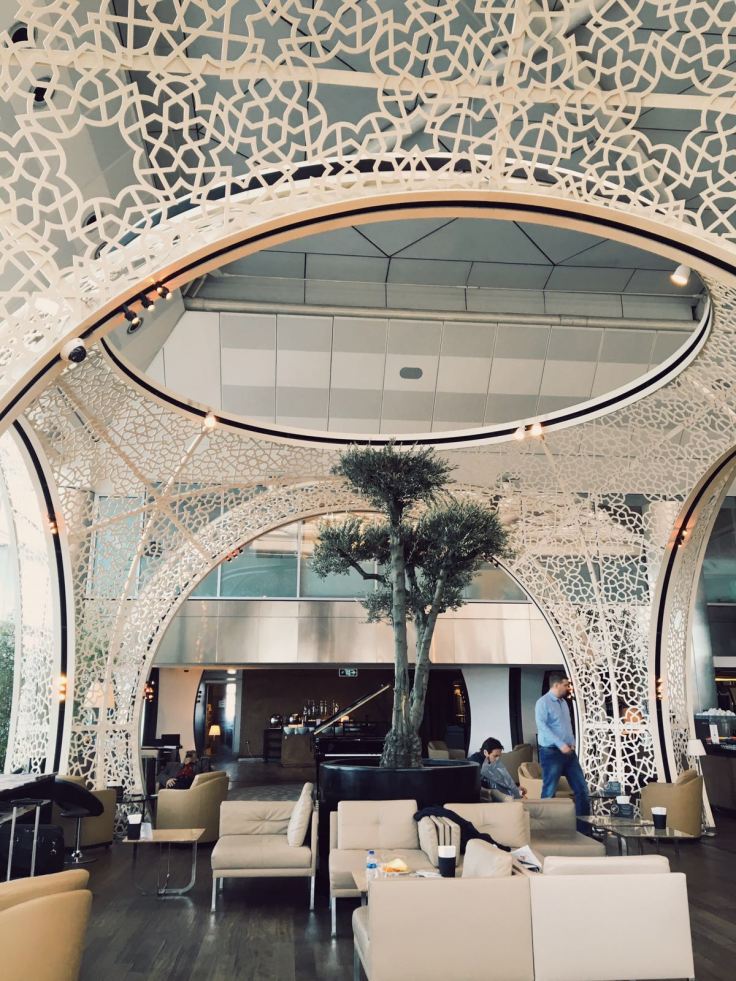 The 10 hours passed surprisingly quickly. We weren’t bored at all, and we didn’t even end up watching a movie to kill time as we had planned. We boarded our flight to Cairo at around midnight, and took off at 12:30 am. They announced that we would be in the air for just under two hours, arriving half an hour early. The business class seats for the short flight weren’t lie-flat, but they were very wide, comfortable, and lots of legroom. We had big TV screens with the same huge selection of movies.
Since it was a short, late-night flight, I wasn’t sure if we would get a meal or just snacks, which I wouldn’t mind since I was full from all the lounge food. To our surprise, we were offered not just a meal, but a three course meal! Unfortunately (or fortunately) I was too full to take advantage of it, so I just got a salad and a chocolate cake, which were both very delicious. As promised, we landed in Cairo at 2:30 am, concluding our experience with Turkish Airlines.

Up next: our one-day layover in Cairo!

4 thoughts on “Part I of our RTW Trip: The Turkish Airlines Business Class Experience”